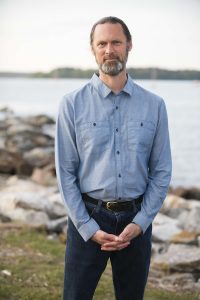 Gary’s journey to Rolfing started in 1992 when he began an avid yoga practice while completing his BA at Columbia University. Yoga practice led to an interest in bodywork and healing systems. He subsequently studied Polarity Therapy, Shiatsu and therapeutic massage and became a licensed massage therapist in 1998. He continues to hold a massage license in the State of Maine.

In 2004, he received Rolfing and was deeply moved by the profound benefits he experienced. A chronic neck problem, which had not responded to chiropractic or deep tissue massage, completely resolved. And to his surprise, he found that his levels of stress and anxiety decreased considerably after receiving a series of Rolfing ® sessions.

He soon devoted his full energy to starting a Rolfing practice. After training at the Rolf Institute for Structural Integration, became a Certified Rolfer in 2006. He strives to maintain the highest standards of practice by participating in ongoing education with senior instructors from the Rolf Institute. He is delighted to offer this profound and powerful bodywork system to the greater Portland community.

If you would like to meet me in person to discuss how Rolfing might be right for you, I offer a free consultation.